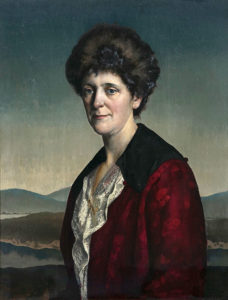 Gerald Leslie Brockhurst is very rarely seen at auction in Ireland, although his portrait of Florence Forsyth sold at Adam’s in June 2019. He spent most of his career in Britain and the US, apart from a sojourn in Ireland during the First World War. He is best known for his dramatically posed portraits of celebrities and society ladies. He moved in high society and at one time cornered the market in scandalous duchesses. He painted a very striking portrait of the infamous Duchess of Argyll and also a flattering painting of the no-less-notorious Wallis Simpson, the Duchess of Windsor.

Brockhurst was involved in a major scandal himself when he left his French wife, Anaïs Melisandre Folen, for his model, Kathleen Dorette Woodward. The tabloid newspapers of the day made much of the ensuing brouhaha, publishing details of Brockhurst’s earlier affair with his wife’s sister. The hounded couple fled to the US, where Brockhurst continued a successful and lucrative career depicting Hollywood luminaries such as Marlene Dietrich and Merle Oberon.

Brockhurst was also an accomplished etcher and there are examples of his work, including Portrait of Oliver St John Gogarty, in the National Gallery of Ireland.

The painting on offer at Adam’s Important Irish Art sale is Portrait of Charlotte Elizabeth Hollingsworth, the wife of a Dublin insurance executive. It’s a fine example of Brockhurst’s style. Charlotte was the mother of Florence Forsyth – whose aforementioned portrait achieved €50,000 at Adam’s last year. This identically sized portrait is guiding at €10,000 to €15,000 and although there is no record of the date it was painted, it was likely done as a commission during the artist’s stint in Ireland around 1917. Donald Teskey is one of only a few living Irish artists whose work does consistently well at auction. He has been in the news following John Kelly’s very sympathetic and revealing profile on RTÉ’s The Works last May. This focused on his West of Ireland seascapes, of which there are two prime examples in the auction. Coastal Report 1 features the dramatic encounter between the turbulent sea and the craggy shore that is Teskey’s trademark. This fairly large (76.2×101.6cm) oil on paper is guiding at €10,000 to €15,000. A smaller more benign West Cork Landscape is also on offer at €8,000 to €12,000.