The Doyle Collection is proud to have several works by Barrie Cooke, one of Ireland’s leading expressionist and semi-abstract painters within its collection. These pieces are exhibited across The Doyle Collection properties in both Dublin and London. Barrie Cooke was born in Cheshire, England in 1931 but spent part of his childhood in the Bahamas. He later went on to study Art History at Harvard University in the United States and at Oskar Kokoschka’s School of Vision in Salzburg. Cooke settled in Ireland in 1954, living initially in rural Co Clare. However, his travel to places such as Borneo, Lapland, New Zealand and Malaya also continued to influence his work.

Together with artists such as Camille Souter and Brian Bourke, he is one of a number of artists that celebrate the natural environment. Indeed Dorothy Cross even describes Cooke as ‘an earth man’, attributing his engagement with land to ‘his obsession with nature and continual change – changing light, changing reflections in water and powerful changes brought about by growth itself’. Nature thus forms an integral part of Cooke’s oeuvre. Waterfall, painted in 1963 certainly captures the forceful power of water in an intriguing manner. Waterfall was purchased by The Doyle Collection and is displayed in The Westbury. Framing a void of light, emphatic brushstrokes are juxtaposed in straight and swirling lines. Cooke’s interest in the elemental also often led to collaborations with poets who shared this fascination, such as Seamus Heaney and British Poet Laureate Ted Hughes.

But Cooke is not only known for his representation of nature. In the 1960s he explored the topic of the female nude, focusing on medieval sheela-na-gigs. These are stone carvings of nudes displaying their genitalia, found on the walls of early Irish churches. Red Jacket echoes this subject matter; a faceless nude sits slightly reclined, her legs splayed from the knees downward. She is enveloped by a shapeless cloak, which dominates the painting through its strong red colour. Its contrast to the muted yellow and brown tones used to form her skin and the background is striking. The abstraction of shape is cleverly supported through the use of colour, leaving the figure schematised. Red Jacket was purchased by The Doyle Collection and is displayed on The Gallery at The Westbury while Nude and Glacier III are currently exhibited in The Kensington in London. 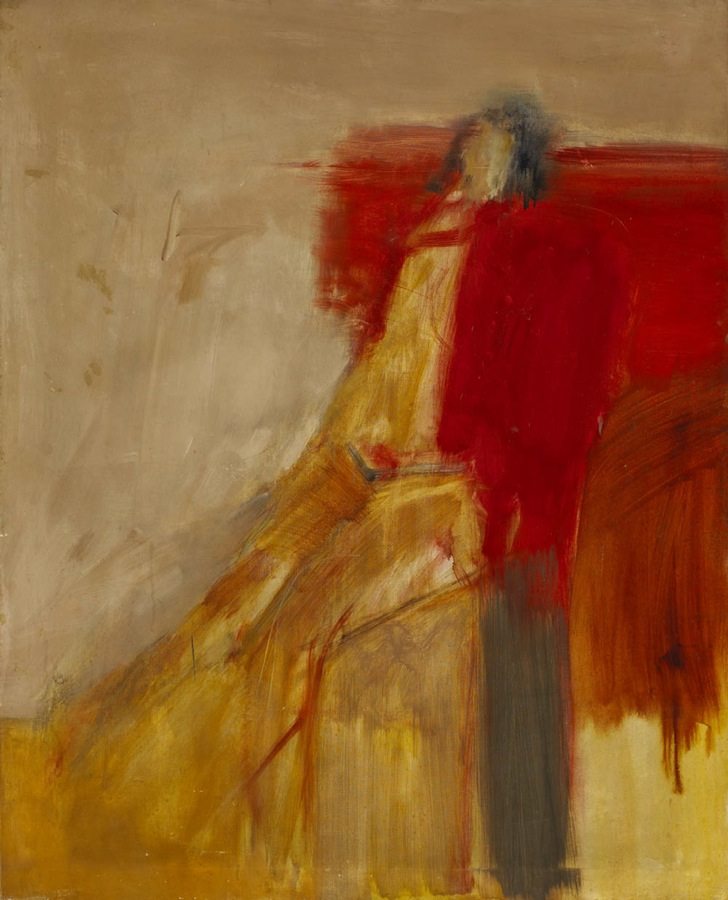 Cooke was elected to Aosdána in 1981. He exhibited widely in Europe, USA and Canada. Major retrospectives of his work include the Douglas Hyde Gallery in 1986, the Haags Gemeentemuseum in 1992, the LAC, Perpignan in 1995 and at the Irish Museum of Modern Art in 2008. His work can be found in the collections of the Ulster Museum, the Stadelijk Museum, Amsterdam and many other public and private collections worldwide.

In 2014 Nick Hennessy Portrait of Cooke entered the collection of the National Gallery of Ireland. Cooke sat for his friend and fellow artist Nick Miller in Sligo in 2013. This intimate portrayal became a poignant homage as the artist passed away a short time later in 2014.